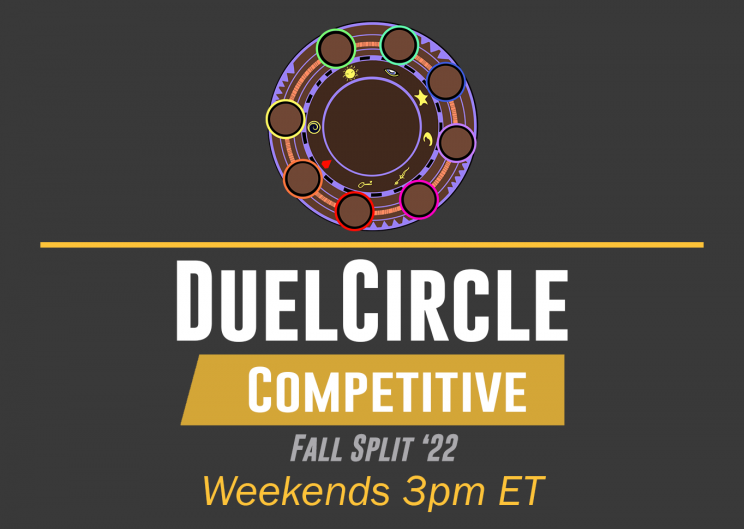 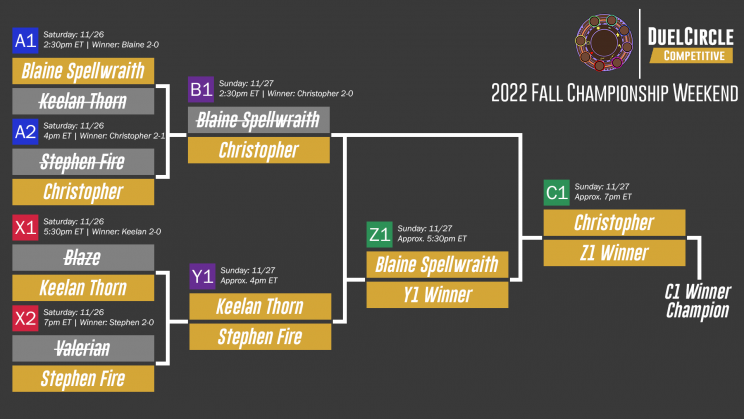 Fall Championship Weekend features a massive lineup of KingsIsle creators with various backgrounds in the W101 Ranked Scene and overall community. Round 1 of the Fall Postseason will be hosted by newcomer CheerValX on Saturday. Lead broadcaster Ryan/Thetechboy will cover Rounds 2-3 of the Fall Postseason on Sunday.

Rotating on the call throughout Fall Championship Weekend will be Ultimate Speedster, Colinsnotkey, Alex Crow, Khalil Red, TheFrenzyGamer, Richard Unicorncaller and TaylorXFlame. The casting crew will provide your play-by-play and in-depth analysis guiding you as a viewer throughout the rest of the tournament.

Broadcasts begin at 2:45pm ET each gameday. Tune in daily for a chance to win special prize codes for KingsIsle games! DuelCircle Competitive Fall Championship Weekend is presented by KingsIsle and Gamigo! 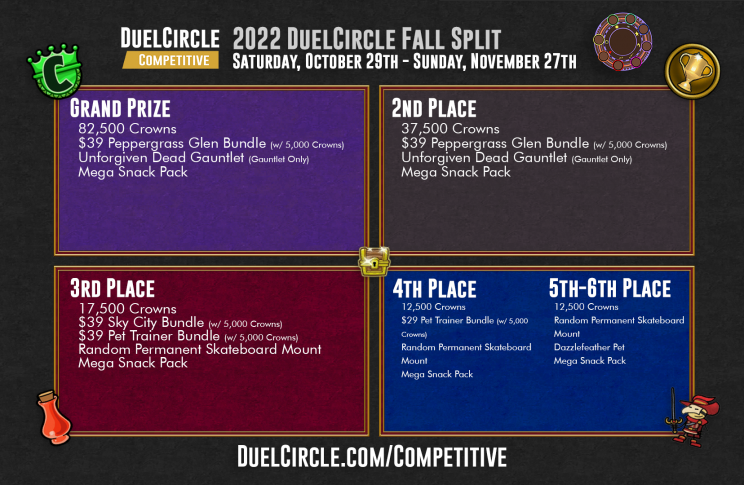 This season, members of the league automatically receive the following participation prizing, in the event that they do not reach the Fall Postseason:

As a reminder, If any redemption issues occur, send an email to community@wizard101.com with the problematic code and your KingsIsle account username ONLY. KingsIsle does not require you to provide your password to them. Codes are for the Gamigo North American version of Wizard101.

Note: On Saturday, November 12th all participants received a bonus random prize code due to internal game start time delays. Codes were sent via DM on Discord as well as email. 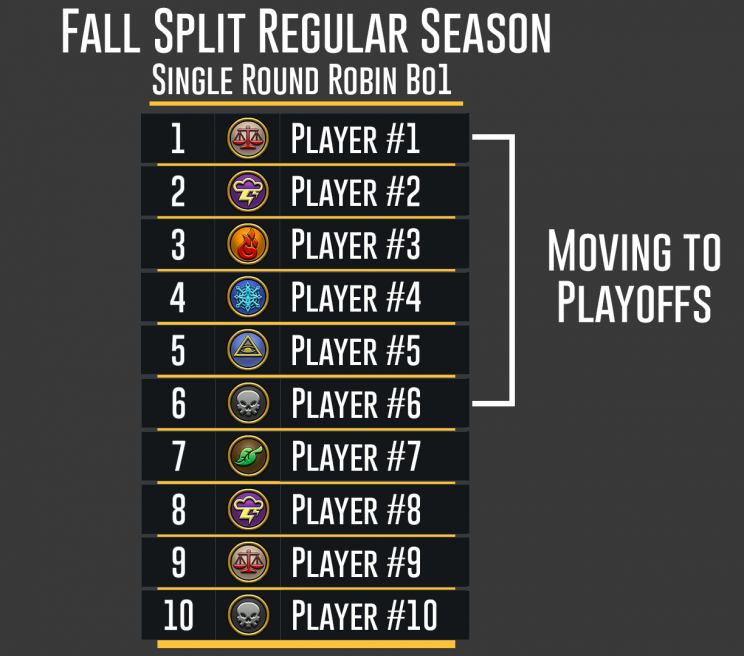 New for 2022, 10 randomly selected players from a prospective entry pool will compete in both the Spring and Fall Splits. Both the Spring and Fall Splits will feature their own single round-robin with regular season standings resetting at the start of the Fall Split. At the end of the Spring Regular Season, Spring Playoffs and Finals will transform into the Mid-Season Showdown. The MSS winner will earn the year’s first championship title and earn some cool prizes at this new checkpoint.

The Fall Split will provide these 10 players one more opportunity to rise to the top and compete for a title and even more prizes. Dominated Spring? Use that fuel to grind through Fall. Need to rebound from a bad beat? Here’s your chance at a redemption arc.

10 Players will face each-other once in a 5 week single round robin format from Saturday, October 29th through Friday, November 25th. Players play 1 match daily, 2 matches weekly on Saturday and Sunday. During Week 5 we will play the final regular season gameday on Friday, November 25th and the Fall postseason will take place over that weekend. Games begin at 3pm Eastern with a 30 minute time limit. 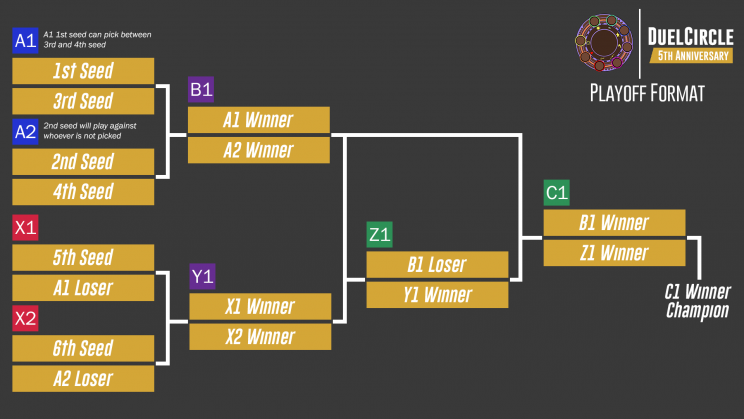 Playoff Matches are played in a Best-of-Three series. In between games, players have 15 minutes to reset and prepare for the following game. Similar to the Regular Season, games will also have a 30 minute time limit.

The 1st place seed will be able to choose between the 3rd/4th place seed as their Round 1 opponent in match A1. For more information, reference Section 5 of the DuelCircle Competitive Rulebook. 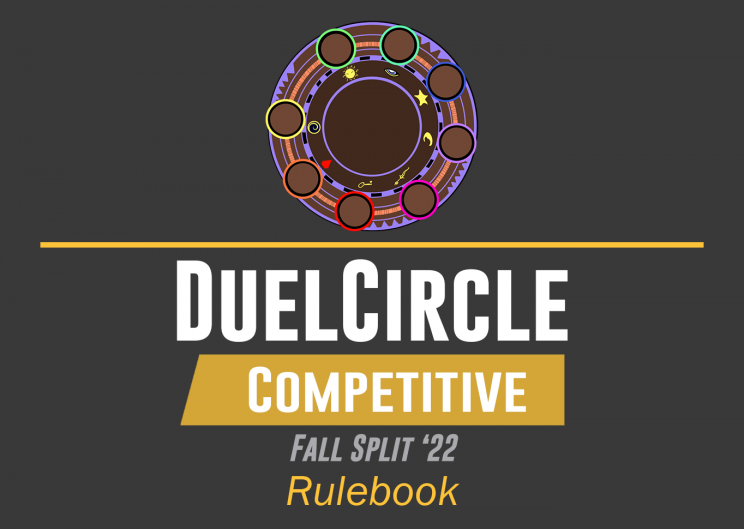 Throughout 2022, we’ll be carefully adjusting these rules over time based on gameplay trends within the tournament and within the Ranked 1v1 ecosystem. We want our players to progress throughout the year without the worry of updates impacting the flow of the season. Returning for Season 2 of DuelCircle Competitive, is the Player of the Week Award for each week of Regular Season play. Players can earn 2,500 Crowns for standout performances during their 2 game stretch. Whether a player dominated or heavily improved and stepped up their game (literally), they’ll be in contention to receive the week’s top honors. Player of the Week discussions happen internally, on the tournament broadcasts, and on the Beyond The Spiral podcast.

As a special added inventive, the Player of the Week Award winner for Week 4 (November 19th-20th) + Friday November 25th will receive 5,000 Crowns in place of the standard 2,500 Crown prize!

Note: Player of the Week Awards are currently delayed due to numerous postponed games, we apologize for the inconvenience and hope to announce winners soon.

To see the schedule for each week, click the arrows on the slideshow or select a radio button. For the Fall Postseason schedule, visit the League Format section below. 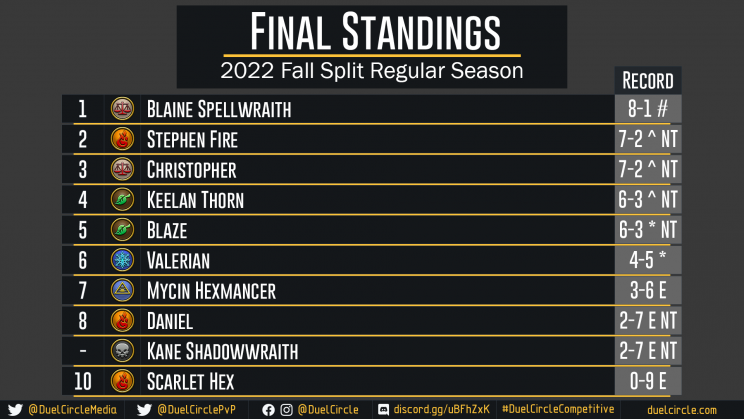 Note: Friday’s Disqualifications and Competitive Ruilings will be updated ASAP, apologies for the inconvenience.

10 of the 12 outstanding Weeks 1-4 postponed games directly involving Scarlet Hex, Kane Shadowwraith, and Daniel have been decided by our no-show disqualification rule (6.5.2).

Beyond The Spiral Podcast 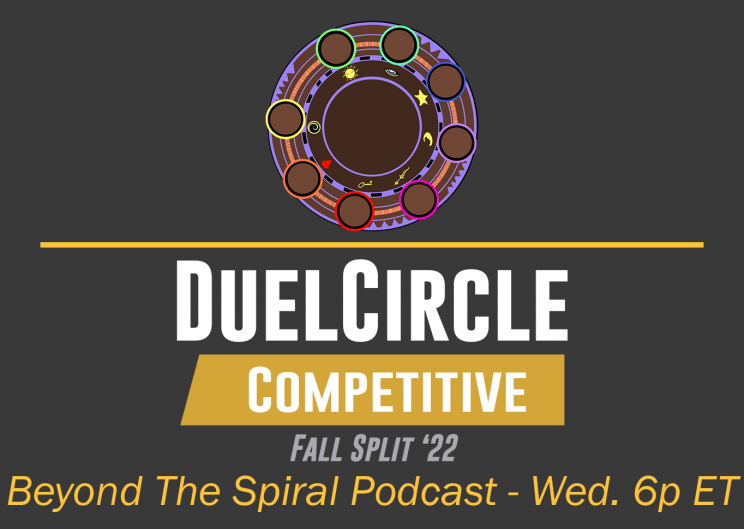 The Beyond The Spiral Podcast, Presented by KingsIsle Entertainment and Gamigo Group, is back for the 2022 DuelCircle Competitive Season! Weekly Recap episodes are released at 6pm Eastern each Wednesday throughout the Spring and Fall Splits.

Note: Due to internal scheduling issues, weekly podcasts are postponed for the interim. We apologies for the inconvenience and hope to bring you the show soon. 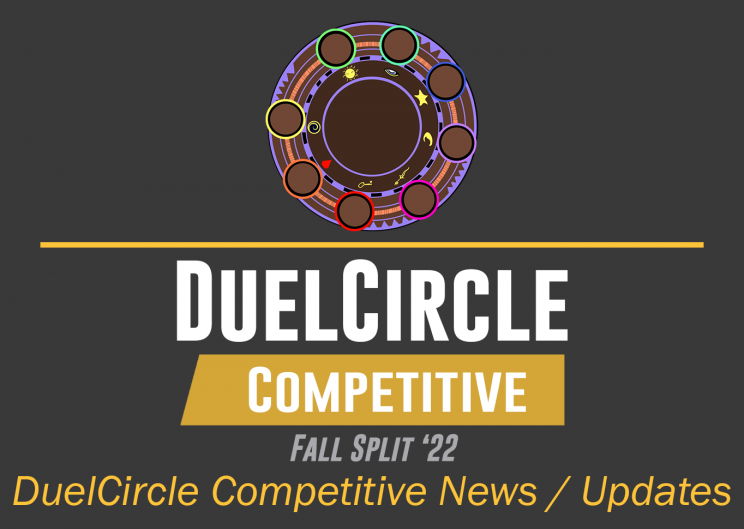 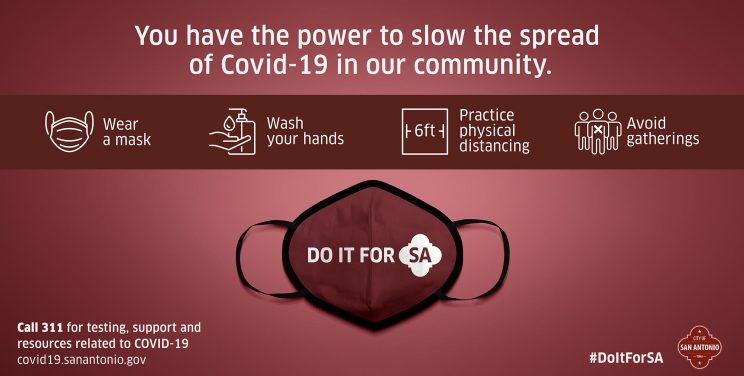 This season, DuelCircle Media has continued our partnership with the San Antonio’s Metropolitan Health District to spread awareness about COVID-19 through messaging on our tournament broadcasts, website, social media, and podcast properties.

Everyone has a part to play, and we need you to help slow the spread. Wear a mask, wash your hands, practice social distancing, and receive a COVID-19 vaccine and/or new bivalent booster. Do it for you. Do it for your loved ones. Do it for your community. For support and resources related to COVID-19, visit COVID.gov.