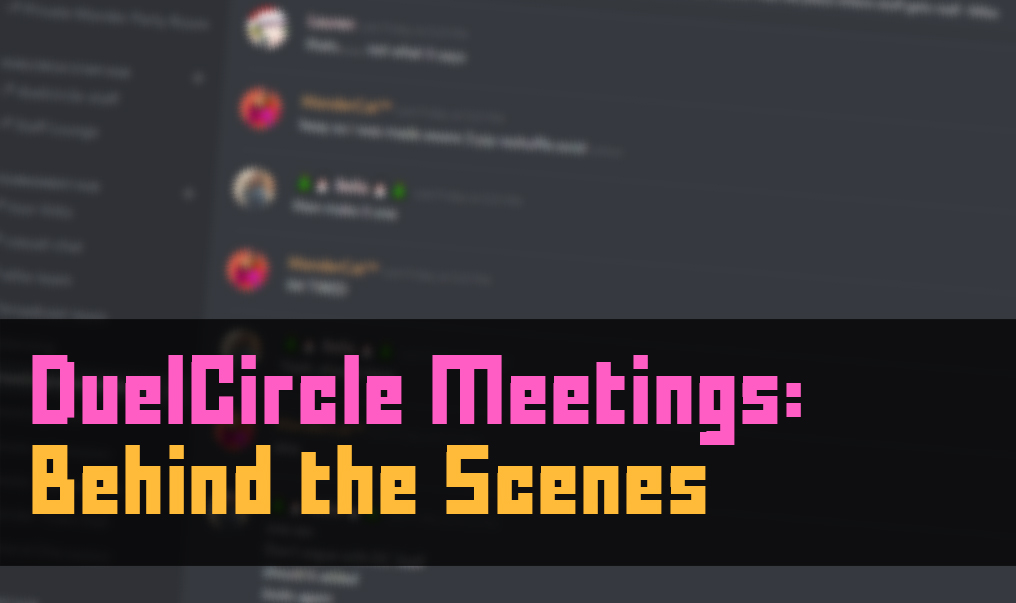 DuelCircle Meetings: Behind the Scenes

The days are counting down to Clash as December 28th and 29th get closer. Behind the scenes here at DuelCircle, we are working our hardest to make sure everything is ready for game day with a week left before the big days. I’m part of the Elite Tournament Team so I help assist with the meetings on Fridays leading up to the final meeting before Clash happens and make sure everything is going smoothly during Clash. It’s no surprise that pulling off an event this big isn’t possible without the entire tournament team helping out. Here’s a more in-depth description of what happens behind the scenes during these Friday meetings.

These meetings happen on Friday and can last as short as an hour to long as 2 hours. They start a month before Christmas Clash so we can work on finalizing the rules and other things. They are recorded and saved in the DuelCircle files for record keeping and anyone who missed them cause they couldn’t make it or if anyone wants to listen back to them. They’re mostly serious but still full of memes and jokes here and there. Our meetings take part in 2 parts, the main part being mandatory and the second part optional.

The main part consists of the serious questions where we discuss topics like rule changes and spell bans and limits. What was a banned or limited spell when we began Clash could change later like the bad juju pvp change as an example. We would all talk about it and then vote on how it should be changed if it a change to the spell ban or limit is required. Then there is the decision to ban spells. The most recent spell ban was regarding the new tree spells from Empyrea part 2. It was decided as a team after discussion and testing it should be banned due to how some of the 2x damage conditions were harder to meet for some schools compared to other schools. We also answer any questions the tournament team may have about how things work or where a spell stands.

Then comes the second part of the meeting which is completely optional. During part 2 of the meeting is when we do all our play testing. Of course I got stuck in the tree again when we play tested after the first meeting. We had to play test several of the different school’s tree spells to see how it would affect the tournament if they were allowed before we made our final choice on banning them.

This year we also did something different for our third meeting. To promote Christmas Clash and give a little inside view of how things are done in preparation of game day, we had a little streamed mock clash with some of our referees being the competitors. We had 4 of our referees face off with each other to be the winner of mock clash. Unfortunately Marcus failed to draw his efreet in finals and had to take second place. Overall it was a fun way to test if they learned anything from the meeting the week before.