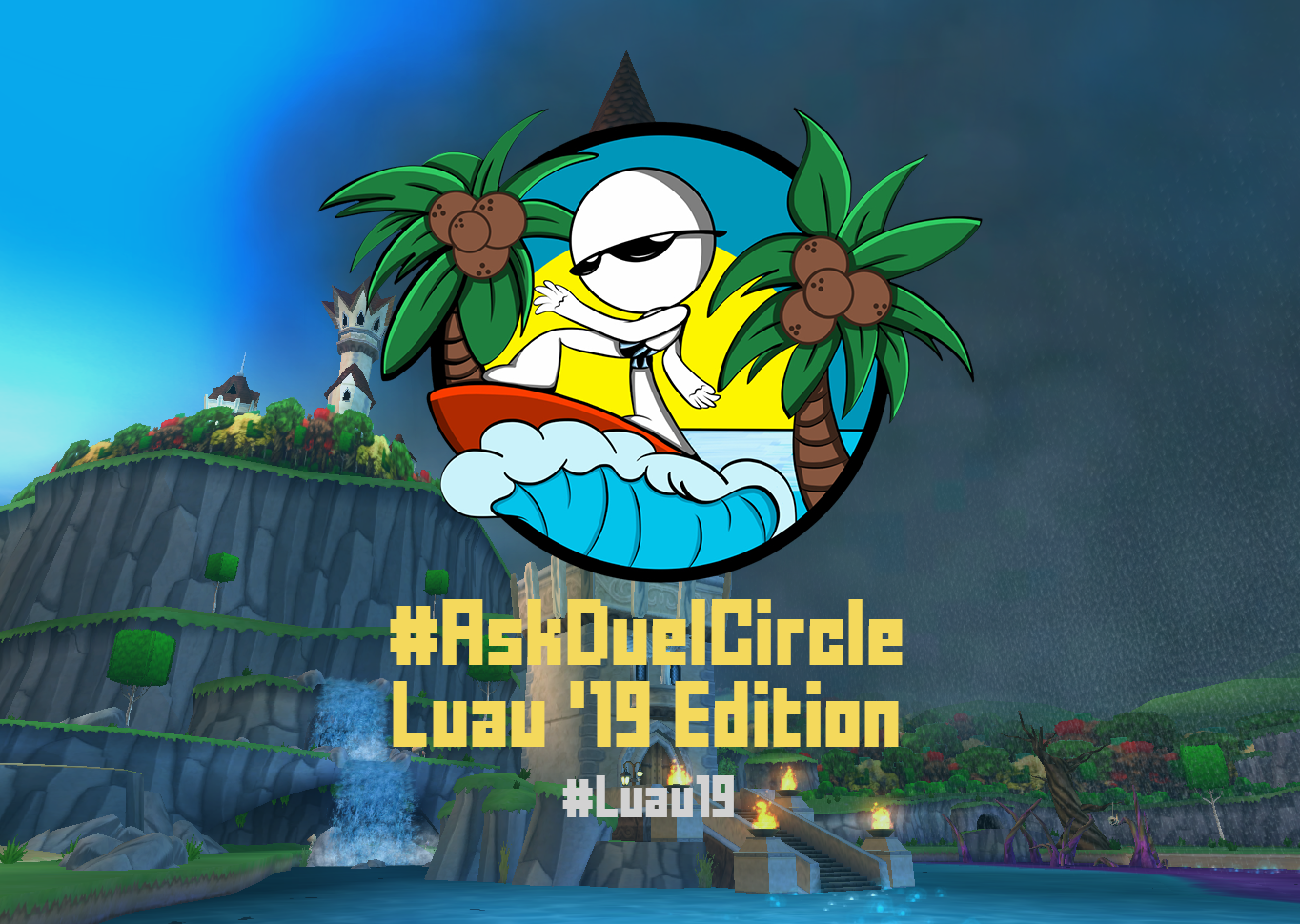 Welcome to the Luau ’19 edition of #AskDuelCircle!

Why is regular fuel the only type of fuel not banned?

We made this rule prior to announcing the tournament specifically due to Scion of Fire’s x2 condition. If you don’t know what Scion of Fire’s x2 condition is, basically you need to have 6 traps on your opponent. The obvious strategy would be to use variants of Fire Beetle. Since Fire Beetle is banned, Fuel is the next best choice. We felt that if Fire wants to use Fuel or Scion in the tournament, they have to be regular, non-enchanted, non-varients.

Fuel is a solid spell, but we want players to not stack a ridiculous amount of traps or to easily get their x2 Scion condition.

Why did you decrease the planning periods between matches?

There’s only gamemodes during the semifinals and finals rounds of the tournament. Since you don’t need to prepare for anything wacky, we figured 15 minutes is more than enough time to work with.

During the semifinals and finals, the planning periods will increase back to the 30 minutes from before. And trust me, with the gamemodes we’re introducing for the very first time, you will need ALL 30 minutes to prepare.

How are you solving toxicity?

In-game, participants are expected to remain positive. In the past, we have disqualified people for aggressive behavior and vulgarity. Starting with Luau ’19, we’re willing to ban people outright from DuelCircle events if people want to cause problems. During the tournament, there will be hall monitors present from KingsIsle to help us maintain a positive environment.

As far as our broadcasts go on Twitch, the same expectations apply. Many people from around the community come out to watch our broadcasts. Whether they’re in the scene or not, they expect the ENTIRE event to remain PG. We have chat moderators from the other fellow fansites assisting on gameday and we’re willing to also ban those people outright from DuelCircle events.

Is the tournament rigged for Stephen Fire?

If it was actually rigged for Stephen, then he’s just straight up garbage for losing in the semifinals during Clash. (We’re totally kidding, he was just unlucky)

In all honesty, we try to make our tournaments as fair as possible. Our rules are tested and discussed internally and we sometimes ask for community feedback to make adjustments. As far as the tournament itself, participants are chosen randomly through Random.org and then randomized again on Challonge.com (the site that hosts our bracket) So it’s all up to RNG(esus).

Personally, what school do you think will win Luau?

This time around, the amount of school representation in the tournament is pretty proportional for the most part. I could give the basic answer of saying that “it’s anyone’s game” but I actually do think any of the schools (except storm) could probably win this.

Personally, “the gap” feels closer than ever before. Death suddenly now is one of the best schools in competitive. Life (even though there’s a heal boost cap) isn’t actually that bad either. Myth may seem like an “underdog” school but Myth is actually really busted as well.

Fire and Balance have always been some of the favorites (and for valid reasons). Ice (even though most of the main utilities they use in normal Ranked are banned) they can still do really well. Storm is just the one school where it’s just really unlikely for them to really do much, but they can pack a huge punch. I really couldn’t give you an answer even if I wanted to.

Why is there a limit on WIld Bolt?

The goal of limiting Wild Bolt to only 3 max damage bolts (5 total) is to limit the RNG factor from deciding a match. Wild Bolt is an important tool for Storm to use but we don’t want to see them use the spell for the entire match. Sure, storm may not have as much health as any other school, and sure we may be taking away their shadow enhanced resources but there’s still tons of options they can use to win a match.

What’s the logic behind the Link/Power link rule?

After Clash, we received tons of complaints about Link and Power Link being too broken and people REALLY wanted them both banned. Obviously, we weren’t gonna ban another thing from Fire’s arsenal (hah, get it). We did notice though, that they weren’t always being used for damage purposes at all. During Clash and in Ranked, we saw how quite a few people use it for the utility aspect instead. You could really gain a ton of health from Power Link if you primordial enchanted the spell. To us, we see it more of a utility spell to remove shields, remove infections, and to gain health.

People usually would tend to use Fire Elf for pure damage for the most part. So we figured if we took away the primordial aspect, it should make things slightly better in terms of healing.

What’s the point of the cooldown rule when someone can just stall by using tower or something?

The “cooldown” rule, which was introduced AFTER we announced signups. Is something we tried before except you could not use ANY spell twice in a row. We brought that rule back in a sense because we didn’t want to see someone constantly spam some of the best loremaster types of spells. For example, Brimstone Revenant does not have a cooldown while Headless Horsemen does have one. Although the argument can be made for Brimstone Revenant, it isn’t something that you would see Fires try to spam. Instead of Brimstone having a cooldown, they just have a 2 spell cap.

Headless Horsemen, we felt didn’t need to be capped since it’s an important tool for Death but in order to prevent any spamming, we figured at least the cooldown should solve that issue. The only spell that needed both a cooldown and a spell cap was Loremaster (and for obvious reasons). We figured the cooldown rule overall would help to limit any abuse.

What influenced you guys to create a situational rule for Death?

The situational rule was one of the most interesting rules we have ever created for our tournaments. We didn’t want to outright ban Scion of Death (all Scions are limited at one single use per game, even though the spell is intended to be a “finisher” in a sense) but we knew we had to do something.

There’s a strategy that Deaths use in-game where the player would intentionally tank their health with the use of Bad Juju (For those of you who may not know, in PvP Bad Juju now takes 25% of your health away). Once a Death would have 33% health or less, they would then use Scion of Death into a Headless Horsemen in order to win the game. This is a strategy that we absolutely did not want to see in our tournament.

We couldn’t really limit Bad Juju since someone could simply use it twice, rely on the opponent to do the rest of the damage needed to achieve Scion of Death’s x2 condition, and then it wouldn’t matter. We figured allowing Deaths the choice of one or the other would be the best route to go with. Bad Juju is a solid resource for Death but when paired with Scion, it becomes abusive fast.

What made you guys want to change the turn order rule for the semifinals/finals anyway?

For those of you who may have no clue about this, check thechangelog from the 13th before looking at the one from the 20th (yesterday).

It’s really difficult to make the turn order as balanced as possible when you’re in a best-of-three format. Obviously, somebody is going to end up going first more than the other person. In the past, we tried to influence that by providing an advantage to the person who lost. On the 13th, we had thought that if you went 2nd (regardless of the Match #2 result) and have the choice in the deciding match, it may be more positively impactful for you.

We immediately got tons of feedback from the community, negative feedback. Before we released this into the changelog, we discussed it internally among the referees. They had felt along with most of the organizational team, that having the turn order be completely random in the third match wouldn’t have been something any of the participants would have liked.

Fortunately, most of the participants thought that it would be better to just leave it up to RNG(esus) and go from there instead of us influencing the turn order. So we decided to do just that. So currently now, everyone will have the opportunity to go first in either the first or second match, and then the third match will just simply be random. Obviously, it’s not the best, but it’s the best we can probably do with the way the game is currently set up.